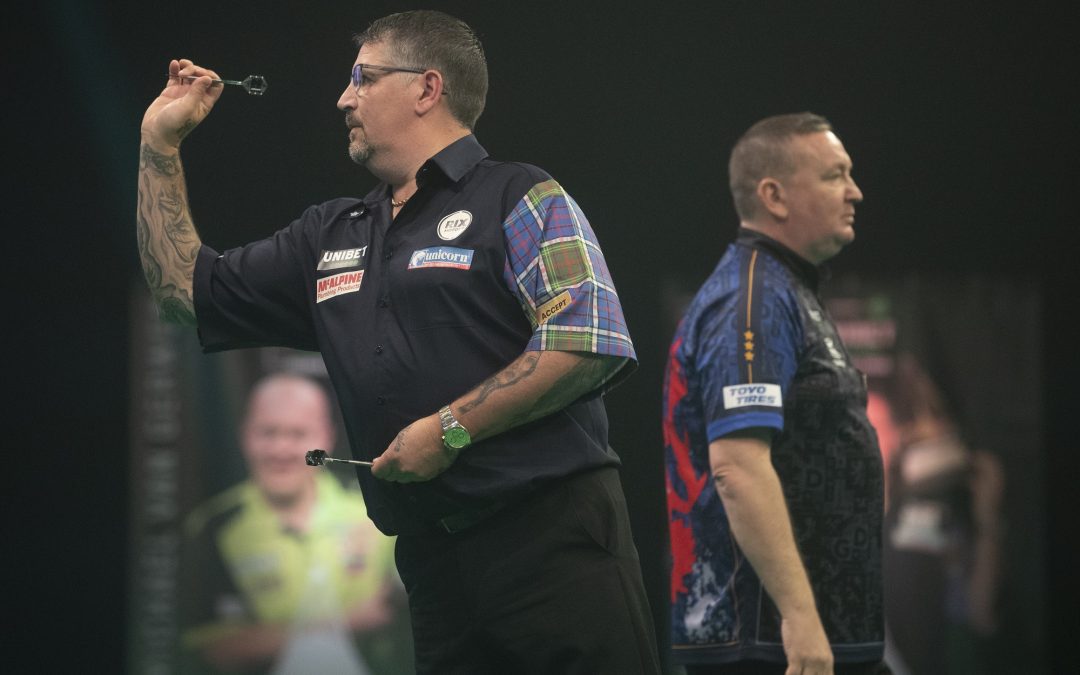 Anderson, searching for his third Premier League title, did not start well. After the first three legs went on throw, Duzza led 2-1. The two time champion then missed six darts for the next leg, conceding the first break to trail 3-1. He quickly put that behind him, punishing a 113 miss from Durrant to find a 56 checkout to get the game back on throw at 3-2.

The Flying Scotsman then missed two at tops to level the contest up, before Durrant hit a 74 shot to lead 4-2. More missed doubles cost Anderson, as Duzza hit 25 to go 5-2 ahead. After both shared the next two legs, Anderson would then win the 10th leg, hitting an 84 checkout to trail 6-4 at the interval.

This seemed to inspire Anderson after the break. A 120 checkout got the game back on throw at 6-5, before the Scotsman then cleaned up 80 on tops to level at 6-6. Both shared the next two legs, before Anderson found double 10 to take an 8-7 lead, his first lead of the contest.

Anderson would hold throw in the next leg, leaving him one away from the final 9-7. He was left on tops in the 17th leg, but was not given a chance to hit it, thanks to a 113 checkout from Durrant to make it 9-8. Then, on throw, Ando missed bull for an 83 outshot which would have seen him into the final. Duzza then came back to find a 74 checkout to break back and take the game to a deciding leg.

In a tense final leg, both had chances to win it. Anderson missed another shot at bullseye and two at double eight, while Durrant missed one at tops. In the end though, Duzza would find double 20 to win 10-9 and bring an absolute scrap of a semi final to an end.

Anderson can take heart from another Play-Off appearance, as use it to build on for the rest of the season. We’ll next see him in action in November, first at the PDC Winter Series, followed by the BoyleSports Grand Slam of Darts.